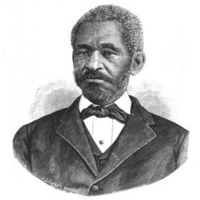 Lewis Hayden was born into slavery in Lexington, KY; his name at birth was Lewis Grant. He escaped and left Kentucky with the help of abolitionists Calvin Fairbank and Delia Webster. On January 4, 1845, Webster received a sentence of two years hard labor for her part in the escape; she was pardoned on February 24, 1845. Also during February, Fairbank was sentenced to 15 years. Hayden, who had relocated to Canada, changed his name from Lewis Grant to Lewis Hayden. The Hayden family soon returned to the U.S. Lewis, an abolitionist, worked with his wife, Harriet, to challenge racial segregation on railroads in Massachusetts and provide for runaway slaves passing through Boston. Lewis also gained some degree of wealth and raised $650 to purchase his freedom and to help Fairbank get out of prison. Fairbank was pardoned on August 23, 1849. Lewis Hayden was elected to the Massachusetts Legislature in 1873, seven years after the state's first African American Legislators Charles Lewis Mitchell and Edward Garrison Walker. For more see Black Bostonians, by J. O. Horton and L. E. Horton; Dictionary of American Negro Biography, by R. W. Logan & M. R. Winston; and Delia Webster and the Underground Railroad, by R. P. Runyon.

This image is in the public domain.