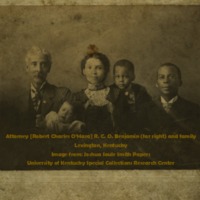 Robert Charles O'Hara Benjamin was shot in the back and died in Lexington, KY, in 1900. He was killed at the Irishtown Precinct by Michael Moynahan, a Democrat precinct worker. The shooting occurred after Benjamin objected to African Americans being harassed while attempting to register to vote. When the case went to court, Moynahan claimed self-defense, and the case was dismissed. Benjamin had become a U.S. citizen in the 1870s; he was born in St. Kitts and had come to New York in 1869. He had lived in a number of locations in the U.S., and he came to be considered wealthy. For a brief period, Benjamin taught school in Kentucky and studied law. He was a journalist, author, lawyer (the first African American lawyer in Los Angeles), educator, civil rights activist, public speaker, and poet, and he had been a postal worker in New York City. In addition to being a journalist, Benjamin also edited and owned some of the newspapers where he was employed. Between 1855-1894, he authored at least six books and a number of other publications, including Benjamin's Pocket History of the American Negro, The Zion Methodist, Poetic Gems, Don't: a Book for Girls; and the public address The Negro Problem, and the Method of its Solution. In 1897, Benjamin returned to Kentucky with his wife, Lula M. Robinson, and their two children. R. C. O. Benjamin organized Independent Negro Political Leagues [source: Semi-weekly Interior Journal, 09/28/1897, p.1]. Benjamin was editor of the Lexington Standard newspaper. The first bust that Isaac S. Hathaway sculpted was that of R. C. O. Benjamin. For more information see Robert Charles O'Hara Benjamin, by G. C. Wright in the American National Biography Online (subscription database); and "R. C. O. Benjamin," Negro History Bulletin, vol. 5, issue 4 (January 1942), pp. 92-93.