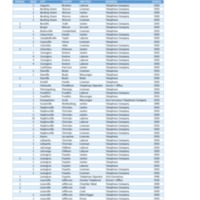 Added to this entry is a .pdf of the excel spreadsheet that lists the number of African Americans employed in telephone-related jobs in Kentucky from 1910-1940. The data comes from the U.S. Census. Additional data about Kentucky are mentioned in this entry for the decades 1940-1960, and comes from the source The Racial Policies of American Industry, Report No.10, The Negro in the Public Utility Industries by B. E. Anderson. The Anderson report was published in 1970, and was the first nationwide employment study of African Americans employed by public utility companies. Telephone companies were considered a public utility. This entry focuses on employees in telephone-related jobs. It will be noted that the employment patterns in Kentucky did not mimic what took place on the national level.

Telephone services and companies started in Kentucky in 1877 [source: "Telephone Service" in The Kentucky Encyclopedia edited by J. E. Kleber, pp.873-874]. The telephone industry continued to grow, and for several decades there was no consistent count of telephone employees by race in Kentucky or anywhere else. However, there were the early reports of total number of employees and other statistics made public by the American Bell Telephone Company. Two examples are the report published in Statistical Abstract of the United States: 1891, No.235-Telephone Statistics, p.27; and the information in Statistical Abstract of the United States: 1900, Table No.117, p.388. The American Bell Telephone main office was located in Boston, MA, and the company was a monopoly in the telephone business.

"Employment statistics by race are incomplete for the utility industries before 1920. The limited data available, however, show 529 Negroes employed as telephone and telegraph linemen, and 69 employed as telephone operators among the 89,912 workers employed in those occupations in 1900." ~ Source: p.65 in The Racial Policies of American Industry, Report No.10, The Negro in the Public Utility Industries by B. E. Anderson.

Prior to the 1930s, the utility industry grew more heavily in states outside the south. Fourteen southern states made up "slightly less than one of every six workers in the three utility occupations" [electric power; gas; and telephone communications] [source: p.68 in The Racial Policies of American Industry, Report No.10, The Negro in the Public Utility Industries by B. E. Anderson]. The southern states were not among the employment leaders in the telephone industry or the labor union efforts. Companies such as Southern Bell Telephone, [formerly the Atlanta Telephone Exchange] in Georgia, created its own associations and unions as a way of getting around independent labor unions recruiting their employees as members. [source: Pulling together for productivity a union management initiative at U.S. West, Inc. by U.S. Congress, Office of Technology Assessment, Chapter 2 - Labor, Management, and Unions, pp.21-36].

The International Brotherhood of Electrical Workers (IBEW) organized in 1891 and was the labor union that initially included telephone company operators and linemen. However, the IBEW barred African Americans from becoming members. The organization had many challenges and was not able to gain control over labor in the telephone industry, especially in the south. In 1906, the IBEW called a strike for linemen at the Southern Bell Telephone Company that served several southern states. The strike failed after sixteen weeks because the Southern Bell Telephone Company replaced the striking linemen with non-union African American linemen [source: Anderson, p.74]. So, for the next 60 years the IBEW still did not accept African American members. Though, with ongoing civil rights challenges, finally in 1966 two African American members were admitted to the IBEW. [source: V. Riesel, "Wilkins at AFL-CIO Convention," The Crisis, January 1968, p.14].

Most of the men were linemen (33) or laborers (26), and the other men were employed as a driver, foreman, helper, wagon driver, janitors, messengers, porters, two telephone operators in Louisville - one at a hotel and one at a private phone, and one man with an unknown employment title in Midway, KY. Fifteen of the linemen were employed in Louisville and 10 of the laborers were employed in Hopkinsville. The city with the most African American employees in 1910 was Louisiville with 30, followed by Hopkinsville with 14, and the remaining 38 employees were located in 25 other Kentucky cities/towns.

The loss was in the hiring of African American male employees in Kentucky. There had been 80 men employed in 1910, and there were 35 in 1920. There were 12 laborers and 10 linemen, with the remaining 13 men employed as a fireman, janitors, and porters. The loss had occurred a decade ahead of  The Great Depression. The city with the most African American employees in 1920 was Louisville with 16, and the remaining 30 employees were located in 19 other Kentucky cities/towns.

At this time, no records have been found of protests by African Americans challenging the employment practices of telephone companies/exchanges in Kentucky. However, Venus Green notes in her article that African American protests took place during WWI up through WWII in cities such as Washington, D.C., New York City, and St. Louis [source: V. Green, "Race, gender, and national identity in the American and British telephone industries," International Review of Social History, v.46 (2001), pp.185-205].

In 1930, on the national level, The Great Depression (1929-1939 or 1941) was causing large-scale layoffs. Total telephone industry employment had been 578,602 in 1930 and was down to 316,600 in 1940. Overall employment in the telephone and telegraph companies decreased by 45.3%, and among African Americans the decrease was 41.9% [source: Anderson, p.79]. Though, in spite of the layoffs, the telephone companies had more employees than the electric power companies and the gas companies, and still the telephone companies continued to hire less African Americans than the other utility companies [source: Anderson, pp.77-76, Table 21. Public Utility Industries Employment by Race and Sex United States, 1930-1960 ]. See also Real Folks: Race and Gender in the Great Depression by S. Retman.

The impact of The Depression in Kentucky was undeniable when the 1940 U.S. Census was completed. The number of African American employees noted as working in the telephone industry in Kentucky had decreased by 85%, which was more than twice the national job loss percentage for African Americans at 41.9%. In the 1940 U.S. Census, there were 8 African American employees found to be employed in the telephone industry in Kentucky. There were 2 women; one was a chambermaid in Louisville, and one was a telephone operator in a dormitory in Lexington. All six of the men were janitors. Five of the employees were in Louisville and there was one each in Greenville, Lexington, and Princeton.

The prior year, in 1939, the Federal Communications Commission published the first issue of the Statistics of Communications Industry in the United States. The title contained financial and operating data of telegraph, telephone, cable, and radiotelegraph carriers and controlling companies. There were over 18,000,000 telephones in homes and businesses in the U.S. in 1939 [p.4], and of that number 158,495 were in Kentucky [p.14 Table 2]. On the national level, there were 287,333 employees at telephone companies: 60.95% females and 39.05% males. The compensation of employees was $511,892,396. The largest group with the highest pay were operating officials and assistants who earned $60 or more per week: 6,290 men and 11 women [p.19 Table 6]. The most work-related deaths and injuries in 1939 occurred among men employed in line and station construction, installation, and maintenance [p.21 Table 7]. The gross operating revenue reported by telephone carriers in 1939 was $1,201,427,364 [p.3].

While there was great wealth being earned by the telephone industry, African Americans were a very small part of the operations: they were 0.7% of the total employees in 1930 and in 1940 [source: The Racial Policies of American Industry, Report No.10, The Negro in the Public Utility Industries by B. E. Anderson, pp.76-77, Table 21]. During WWII, the protests by African Americans had intensified toward telephone companies that refused to hire African Americans. The movement had somewhat of an impact and a few African American women were hired as telephone operators [source: V. Green, "Race, gender, and national identity in the American and British telephone industries," International Review of Social History, v.46 (2001), pp.185-205].

In 1937, the League of Women Voters in Louisville, KY, had asked the Women's Bureau for a survey of women workers in Kentucky. The Women's Bureau was a division of the U.S. Department of Labor. In 1979, author H. D. Irvin published information from the survey concerning African American women, on p.84 in Women in Kentucky. ..."the figures serve to emphasize the lack of opportunities for employment of Negro women in the manufacturing industries of Kentucky." "No investigation could be made of black women as telephone operators and dime-store clerks...Black women were excluded from such work. They would continue to be shut out until federal civil rights legislation was passed three decades later."