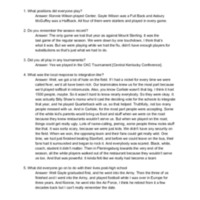 In 1955, Carlisle, KY, integrated its schools, allowing African American students to attend Carlisle High School. This decision was pushed, not only by the recent Brown v. Board of Education edict from the US Supreme Court, but also by the cost of busing the city’s Black students via Greyhound bus to Western High School, the Black high school in Paris, KY [source: McGuffey, A.]. The county students were bused via a yellow van to a different high school.

The decision to integrate the schools came down to a vote within the city school board. Board member Mrs. Shaw cast the deciding vote that broke the tie. She was the mother of Billy Shaw, the quarterback of the Carlisle High School football team. According to multiple accounts, Mrs. Shaw was targeted as a result of her spirited defense of integration.

These Black players led the Carlisle team to a 19-0 victory in the season opener against Paris High School, in Paris, KY, an all-white school [source: Courier Journal, Sept 18, 1955]. During the course of the regular season, they helped the team to a nearly undefeated record; the only game they lost that year was against Montgomery County High School, the last game of the season. Additionally, in the postseason they appeared in the Central Kentucky Conference Tournament. According to the Courier-Journal, their white teammates were accepting, for the most part, there were disagreements but the team functioned as a whole. This tolerance was encapsulated by the words of team quarterback, Billy Shaw, who is quoted as saying to Coach Wells before the arrival of his new teammates, “we don’t care what color they are as long as their jersey is green,” [quoted in source: Finding the Fifties, by D. J. Dampier, p. 229].

One reason for this acceptance was that the young men were known to their teammates due to their participation in intramural softball [Source: McGuffey, A.]. However, this tolerance was not shared by all, especially in places they traveled to play football. According to Asbury McGuffey, if they had a “nickel for every time they were called a N-er” they would be rich. While playing away games the young men were subjected to a lot of animosity from rival players, fans, and coaches. After their game against Stanford, where Carlisle had won quite resoundingly, the defeated team and their fans attempted to prevent Carlisle’s team from leaving by rocking the bus. In addition, segregation in public accommodations was an aggravating obstacle. In order to alleviate some of the burden during the season, the parents of white teammates of the Carlisle team would bring food and drinks since there were few restaurants that would serve African Americans [Source: McGuffey, A.]. After a game in Flemingsburg KY, all of the white members of the Carlisle team walked out of a restaurant that refused to serve their fellow Black teammates.

The four Black players would go on to graduate from Carlisle High School, Gayle in 1957 and the other three in 1958. After high school, they all entered the armed forces; Ronnie in the Air Force, while Asbury, W. H. Farris, and Gayle entered the Army, according to Mr. McGuffey and Jackie Wilson, the daughter of Ronald Wilson. Asbury McGuffey would play football in Europe while in the Army and was part of a championship game.

Asbury McGuffey went on to marry Ronnie and Gayle’s sister Jeannette Wilson, with whom he had two children. Ronnie Wilson went on to retire from the Air Force. He and his wife Carrie Bean Wilson live in Colorado Springs, CO. Gayle Wilson and his wife Barbara live in Cincinnati, OH. William Harvey Farris (W.H.) died on October 3, 2013, and is buried at Camp Nelson.

This entry was written by Angelica Miller.