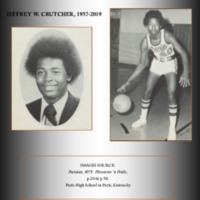 (born: February 13, 1957  -  died: December 18, 2019) Jeffrey W. Crutcher was a member of the Class of 1975 at Paris High School in Paris, KY. During his senior year, he was named captain of the basketball team, The Paris Greyhounds, and the class president. It is believed to be the first time an African American student was named to both posts in the same year. The year 1975 was a pivotal time following more than a decade of school integration, the students were more united in continuing to make a difference during their high school years.

In earlier times, the Paris City Schools had been segregated. It was the 1961-62 school year when administrators at the high school for whites agreed to a form of "partial integration" with a limited number of students from Western, the African American high school, voluntarily attending the white high school. Floarine Fisher was the first African American student on a Paris High School sports team, she ran track in 1963. More students, especially athletes, arrived from Western during the 1963-64 school year, and all of the city public schools were fully integrated for the 1966-67 school year.

The 1964 varsity basketball team had the first African American team members: Clifton Garrard, Rodney Woods, Bill Brack, James Penn, Luzon Roberts, George Doyle, and Gerald Lindsey. The team was coached by "Jeep" Clark. The first African American members of the Basketball Homecoming Court were Diane Richardson and Eleanor Clark in 1964. The following year, 1965, Bill Brack (African American) and Whit Crisswell were named co-captains of the varsity basketball team. The team had a regular season record of 16 wins and 13 loses. The team was coached by Earl Redwine.

A decade later, Jeffrey W. Crutcher, playing a forward, was named the varsity basketball team captain. It was his fifth year of school basketball. The 1975 regular season ended with the Paris varsity team being the 37th District Runner-up, losing to Harrison County in the district finals. The team lost in a double overtime to Mason County in the Regional Tournament. The Paris team was coached by Dave Randolph. "Crutcher was one of the most reliable men on the court."

After graduating from high school, Jeffrey W. Crutcher served in the U.S. Army and received an honorable discharge. He was a member of the American Legion Post 165, and he was a retired carpenter and plumber. Jeffrey earned his plumbers certification while living in Titusville, FL. He was a member of Zion Baptist Church in Paris. Jeffrey loved fishing and breams were his favorite catch, though as a meal, he thought the fish had too many bones. Jeffrey Wayne Crutcher was born in Cincinnati, OH, the son of George W. Sr. and Martha J. Sweat Crutcher. Jeffrey Wayne Crutcher is buried in the Camp Nelson National Cemetery.