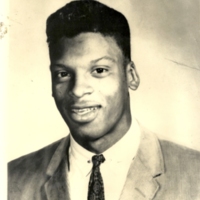 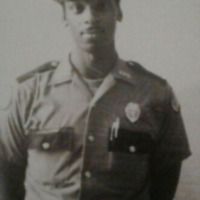 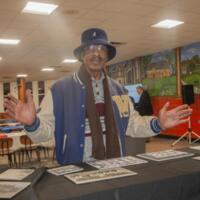 The following information on Norman W. Allen comes from conversations with his daughter Sherry Allen-Tribble and from her unpublished essay titled "A Back Porch Conversation with My Daddy," 06/14/2020. Sherry Allen-Tribble also provided newspaper clippings, photographs, and the newspaper article by Jeanine Scott, "Norman Allen was one of the first African-Americans on the Paris Police Force," The Bourbon County Citizen, July 9, 2020. Additional information comes from the telephone interview with Norman W. Allen on March 10, 2021.

Norman W. Allen was born in Paris, KY and is known as "Bee" to his family and friends. His law enforcement career spanned 50 years, from 1967 to 2017. Just prior to the start of his career, he was among the community members who led in the appeal to the Paris City Commission to hire Black police officers. In 1967, both Norman and W. Elwood Parker, Sr. were brought on as volunteer auxiliary policemen who worked on the weekends. In 1971, Norman W. Allen was hired full time and became the city's first African American police officer. W. Elwood Parker, Sr. was hired next. It was a time of change for the City of Paris. The following year, in 1972, Norman W. Allen was the first African American student and the first police officer in Paris, KY to graduate from the police academy at Eastern Kentucky University. He was president of his class which had 44 members that included two African American students [Basic Class No.21].

On his first day as a full-time police officer in Paris, KY, Norman was given the following instructions by Chief Jordon: he could not drive the police car; he could not patrol on his own in a police car; everything in the Black neighborhood was his responsibility; and he was NEVER to arrest a white woman. Norman tried, but found that he could not do his job given the restrictions placed upon him. So, he turned in his badge and walked away. A little more than a week passed, and Chief Jordan came to Norman's home to talk things over. The restrictions were lifted, except, he still was NEVER to arrest a white woman. Norman returned to the police force. In 1972, he received the Kentucky Admiral Award for assisting in the capture of the culprit in the murder of State Trooper John Conley.

Norman would add to his duties by becoming an instructor. It was a requirement that all officers complete 40 hours of training each year. As an instructor, he taught the continuing education courses to Paris policemen. Norman was also a politician; when Alvin Leach ran for Bourbon County Sheriff, he asked Norman to run with him as his Deputy Sheriff. The campaign was unsuccessful. Norman continued as a Paris police officer, and was the first African American to earn the rank of sergeant. Norman W. Allen and W. Elwood Parker were the only African American police officers in Paris until 1975 when Norman left to join the Lexington Police Department. It would take about 10 years before William Cason and Freddie Franklin would be the next African American hires. Jimmy Bannister and Tyrone Williams were auxiliary officers. Myron Thomas was the second African American to make sergeant in the Paris Police Department, and in his present position, he is the first African American Chief of Police.

Norman W. Allen had opened the door and kept it open to a profession that had been closed to African Americans in Paris, KY. His journey started with his education at the Brentsville School in Bourbon County, grades 1-8, and continued at the segregated Western High School in Paris. Norman W. Allen graduate in 1962, he had been the starting center on the basketball team and a receiver on the football team. The teams were coached by William "Chief" Reed who was also a mentor to Norman after his father died. Norman was a good student and a good athlete. In his last year of high school, he was Honorable Mention statewide in football by both the Louisville Courier-Journal and Lexington Herald-Leader. He received a football scholarship to Jackson State College [now Jackson State University].

During his first year at Jackson State, a football injury ended his playing career and his scholarship. Faced with the decision to stay at school and work to pay for the remainder of his education, or come back home and work to support his first wife and child, Norman W. Allen returned home. He was janitor at the First United Methodist Church at the corner of 7th and Pleasant Streets. His employers were good to him, but he hated the job and the mop. He stayed with the job for about 5 months, then joined his stepmother, Ernestine Allen, as an employee at St. Joseph Hospital in Lexington, KY. Norman was an orderly.

Meanwhile, DURA Corporation (automotive supplier) came to Paris, KY in 1967. Norman applied for a job, and with the recommendation of William "Chief" Reed, he became the company's first African American employee. Jim Brooks and Preston Johnson were hired next. Norman recommended to this supervisor, Guy Ormsby, that other African Americans be hired. Two years later, Norman became the first African American foreman at the Paris Dura Company. This was also the period when he became a policeman in Paris. He worked at Dura during the day shift, and was a police officer on the night shift.

People in the community called him "Bee" and it was Bee who coached a teenage baseball team and a basketball team. His Pony League baseball team (12-15 year olds) was named the Tigers and they won 7 out of 8 championships. The first season was tough; it was the first integrated team in the league and there were some bad calls during the games, calls that were viewed as racist and unfair to the players. Bee met with the team members and their parents, and it was decided to forfeit the rest of the season. The team came back stronger and for the next seven seasons they took home the championship trophy every year. The players were  transported to and from the games in Bee's blue Studebaker that his team called the "Space Mobile."

The youth basketball team was sponsored by the St. Paul United Methodist Church. The team was named the Saint Paul Saints. Black players were not chosen for the league teams, so they formed their own team with Bee as the coach. It was a winning team, so much so that the Paris YMCA director, Delza Maggard, called the coach. "Bee, you can't have an all-Black team!" Bee replied, "I didn't want an all-Black team." The following year, the Black players were selected for the various teams, thus integrating the youth YMCA basketball league.

By September of 1975, it was time for a change and Norman W. Allen left the Paris Police Department to join the Lexington Police Department. He was in the Detective Bureau and in 1978 joined the newly formed Hostage Negotiation Team supervised by Lieutenant Lloyd Johnson. Starting in 1976, he also worked part-time at Blackburn Correctional Institute, and was promoted to Deputy Warden in 1984. Two years later, in 1986, Police Chief Nolan told Norman that he could not continue to do both: he was either the deputy warden at Blackburn or a member of the Detective Bureau in the police department. Norman remained with the detective bureau for 10 years before returning to patrol.

In the community and prior to his 2017 retirement, Bee was the first African American president of the Paris Chapter of the Jaycees. He held the position twice and received the Triple Crown Award for leading in the remodeling of Teen Square [a gathering and social event space for teenagers in Paris]. Other recognitions include four Kentucky Colonel awards, three of which were for his work in the Paris community and one for his service with the Lexington Police Department. Bee was also a Mason. He is a former president and a founding member of the 30/20 Club, an African American civic and social organization. The club's name comes from the 20 founding members who each put in $30 to establish the organization.

With his retirement in 2017, Norman W. Allen ended one of the longest law enforcement careers held in Kentucky. He now dedicates more time to his family and his favorite television program, The Young and the Restless.

Norman W. Allen is the son of the late Margaret L. Reed and Reverend Edward Jackson Allen. He is the husband of Florence E. Haith Allen (they married in 1981). He is the father of Anthony, Sherry, Antonio, Kacy, Velika, and Brooks who died as a toddler. He is the grandfather of Jason, Sara, William, Michael, Russell, Kassidy, Aiden, Salem, Samuel, Maryam, and Muhamad. He is the great-grandfather of Aayla, Rue, and Ronin.

* On March 29, 2021, House Member Jason Nemes (R) of District 33, introduced the citation in recognition and honor of Norman W. Allen for his integrity and professionalism as a Kentucky law enforcement officer for 50 years. The citation was adopted by the House of Representatives of the Commonwealth of Kentucky.