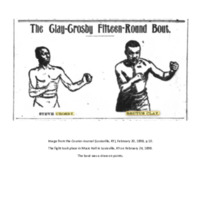 (born: July 1877  -  died: January 16, 1916) John B. Clay, known as Brutus Clay, was born in Lexington, KY. In his 1916 death announcement, he was described as a former champion colored boxer. He died of pneumonia at his home, 218 Corral Street, in Lexington, KY. Brutus Clay's boxing career was from 1897-1903, according to his record at BoxerList. He was a welterweight with 14 fights: 11 wins (10 KOs), 2 losses (KOs), and 1 tie. His fights took place in Lexington, Louisville, Paris, and Cynthiana. He had fought against fighters such as Al Howard, who he knocked out and ended Howard's boxing career. He also fought against Steve Crosby and the bout ended in a draw. His first loss was to Nat Wilson when the two fought at the Opera House in Paris, KY, on November 14, 1898. Wilson, from Mt. Sterling, KY, won by a knockout. Brutus Clay's next loss was his last fight and that was against Kid Ashe who won with a knockout in Lexington, KY, June 1, 1903. Notices about Brutus Clay's bouts can be found in the newspapers in Lexington and surrounding counties.

In 1905, Brutus Clay was among the crowd in Proctor's Saloon on Wilson Street and all were having a pretty good time when a couple of shots were fired and there was a disturbance of sorts that caused the police to shut the place down and haul everyone into court. Source: "Police Court," Lexington Leader, 03/10/1905, p.6.

During his boxing career, Brutus Clay had also done a bit of acting and dancing. He was an entertainer in addition to being a boxer. In 1898, he was one of the characters in the entertainment group that performed in "Big Times in the Blackville Club." The event took place in Lexington and featured a cakewalk contest and cakewalk performances, singing, and comedy acts. Source: "Frog Eye" goes down," The Morning Herald, 12/15/1898, p.7.

In 1899, Frog Eye (John Walker for Louisville) and Brutus Clay were among the cakewalk contestants at the Opera House in Lexington, KY. Frog Eye won the Thursday night contest. Brutus Clay defeated him the following night. Frog Eye did not take the loss very well; he had some drinks, got into a disagreement with a retailer, and landed in court. Source: "Frog Eye's sorrows," The Tri-Weekly Kentucky Advocate, 09/11/1899, p.3.

Brutus Clay was also a musician and is noted as such on his death certificate. He was head of the orchestra that he formed after his boxing career. John Brutus Clay was the son of Julia Lewis and William Clay. His funeral services were held at Main Street Baptist Church in Lexington and Rev. J. J. McCutcheon conducted the services. John Brutus Clay is buried in African Cemetery #2.