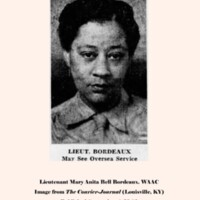 In 1931, she and Addison Ramsey were co-instructors of the Baxter Square Playground in Louisville in 1933, employed by the Division of Recreation within the Department of Welfare.

Prior to enlisting in the Army, she had been  married to Howard J. Bordeaux; the couple is enumerated in the 1930 U.S. Census. In the 1940 U.S. Census, Mary and Howard Bordeaux were living in Topeka, KS. At some point after 1940, the couple divorced, and Mary was living in Louisville when she enlisted in the Army in 1942.

Bordeaux did her basic training at Fort Des Moines, IA and received the commission of lieutenant. She was a member of the first graduating class of officer candidates in the WAACs.

Women in the Army was big news. One hundred or more newspapers around the country published details on the first women recruits' clothing, meals, and other general activities. Mary Bordeaux's name and picture were frequently included in the articles that mentioned the Negro WAACs.

In 1943, Mary Bordeaux was promoted to the rank of second officer. She served as the Negro recruiting officer for the Women's Army Auxiliary Corps in the Sixth Service Command. She had also served as an army hostess at Fort Knox, KY.

In January of 1943, Lieutenants Mary Bordeaux and Gertrude J. Peeples were sent to Detroit, MI to address the unfavorable publicity about the mistreatment of African American women training for the WAACs. Both Bordeaux and Peeples were Army recruitment officers.

Mary Anita Bell Bordeaux was born in Louisville, KY, the daughter of Nora Kincaid and Stephen A. Bell. The family is enumerated in the 1910 U.S. Census.