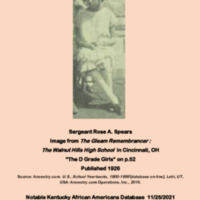 Rose Ann Gazaway was born in Williamsburg, KY, the daughter of Carrie Short and Nelson Gazaway. The family was enumerated in the 1920-1940 U.S. Census when they were living in Cincinnati, OH. On December 24, 1931, Rose Gazaway married Carey Moore in Cleveland, Ohio. The marriage had ended by November of 1934 when Carey S. Moore married Nancy Covington. Rose Gazaway resumed using her last name and returned home to live with her family.

In 1942, Rose had remarried and was separated from her husband when she enlisted in the Army in Cincinnati, OH, according to her record in the National Archives, Access to Archival Databases. Rose Simpson was included in the picture of women who had enlisted in the army, the photograph was published in The Cincinnati Enquirer. The women were said to be the first from the area to enlist in the Army, and Rose Simpson appears to be the only African American in the picture.

Either during or after her military service, Rose Simpson divorced her husband. In 1949, she married Virgil Spears in Dayton, OH. Rose Ann Gazaway Moore Simpson Spears died in Cincinnati, OH, and she is buried in the Spring Grove Cemetery.

Read about Williamsburg, Kentucky in Wikipedia.