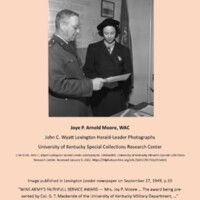 Joye Pamela Arnold was born in Danville, KY, the daughter of Adam Shirley Arnold, Sr. and Alice Hambleton Arnold. Her father was from Evansville, IN, where he had worked at the Gaines Funeral Home. Joye's mother was from Kentucky. After her parents were married, they lived in Danville, KY, where her father was a funeral director, according to the 1920 U.S. Census. The entire family is enumerated in the 1930 U.S. Census. They had moved to Lexington, KY, where Shirley Arnold owned Arnold's Funeral Home at 424 N. Upper Street. His business is listed in the Lexington city directory.

Their daughter, Joye Arnold, was mentioned in the local newspapers several times during her school years; she was a good student and was active in school activities and organizations. She was also active in community organizations. In 1928, her name was included in the list of third grade honor roll students at Russell School in Lexington, KY. Her name would be included among the honor roll students for most of her school years. In 1934, she was one of the young women admitted to the Girl's Friendly Society at St. Andrew's Episcopal Church in Lexington. In October of 1936, she was elected one of the three social directors of the Sub-Debs and was scheduled to host the groups next meeting. The following year, Joye Arnold was one of the scrapbook winners on "Flood Tragedies," in response to the Ohio River flooding in 1937. That same year, she was president of the student members of the Dunbar High School library staff; she had been a member since 1935. She gave a presentation for National Book Week in October of 1937. The following year, Joye Arnold was a senior at Dunbar High School when she joined the debate team. This was a busy year for her. She was in the cast of the high school musical "The Swami of Bagdad." She was also a member of the Girl Reserves of the Phyllis Wheatly YWCA and was among the group of young women who attended the district conference in Paris, KY. The group was led by the organization chair, Mrs. Ada H. Taylor. In May of 1938, Joye Arnold helped co-sponsor a style show at Pleasant Green Church for the benefit of the Lone Star Club. Joye Pamela Arnold graduated from Dunbar High School in May of 1938.

After high school, she left Lexington, KY to attend West Virginia State College (now West Virginia State University). It was mentioned in the newspaper that she was returning to college to continue her sophomore year in January of 1940. After college, Joye P. Arnold was living in Washington D.C. where she was a stenographer and typist. In 1943, she enlisted in the Army, according to her record in the National Archives, Access to Archival Databases. In 1946, Joye P. Arnold married Dowell Lafayette Moore from Tuskegee, AL. They got their marriage license in Lexington, KY.

In 1949, Joye P. Moore was a clerk-stenographer in the Professional Services Division at Fort Meade, MD when she received the Army's Faithful Service Award. The award was for her dedication and tenacity in completing the processing of thousands of ROTC summer camp physical examination forms. Her award was presented by Colonel G. T. Mackenzie of the University of Kentucky Military Department. According to the newspaper report about her award, Joye P. Moore was waiting on orders that would send her and her husband, 1st Lt. Dowell Moore, to the far east.