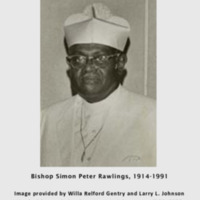 Additional permission to use the information and the attached image were received from Larry L. Johnson via a phone call on April 28, 2022.

"This was written by Larry Johnson and sent to me for the exhibit I worked on at the Scott County Museum." --Willa Relford Gentry

Bishop Simon Peter Rawlings was born August 2, 1914, to Bessie Elizabeth (Sykes) and James “Buck” Rawlings. He was raised in Stamping Ground, KY. At the age of 17, Simon attended a revival at the old holiness church on Main Street in Georgetown, KY, that was pastored by Mother Fain. The church was called the House of God, Holy Church of the Living God, Pillar and Ground of the Truth. There Simon heard the skillful and charismatic piano ensembles of 16-year-old Marvin Pentz Gay. Simon asked Marvin P. Gay, "How do I get that joy?" Marvin responded, “You got to get saved.” Much later in life, as Bishop Rawlings reflected on his youth, he said, "I'll always give him [Marvin Gay Sr.] credit for that because he told me what to do.” In 1931, Simon P. Rawlings joined the House of God.

While at the church, Simon found something else that captured his attention. Mother Fain had a daughter who was Simon’s age. Her name was Julia Ellen Midnight. Simon married Julia Midnight in the summer of 1933, the same year he was ordained to the ministry in the House of God. The following summer, Julia gave birth to their daughter. Julia E. Midnight died as a result of complications during the birth on August 1, 1934. It was the eve of Simon’s 20th birthday.


One month after the death of his wife, a trip to the 16th Annual Convocation in Washington D.C. would quickly advance Simon P. Rawlings' ministry. The General Superintendent of the church, Bishop Johnson, appointed Minister Marvin P. Gay to Marsmill, SC, and appointed Elder Rawlings to be Gay’s assistant pastor.

Rawlings returned to Washington, D.C., and while running a revival, he met Mary Elizabeth Scott in May of 1935. The couple was married and the newly wedded Rawlings moved his family to Lexington, KY. That same year, Elder S. P. Rawlings accepted the appointment to become pastor of the House of God in Lexington, KY. The congregation would move several times. The first church was a storefront on Newtown Pike in 1935. The church next moved to a storefront at 325 Hickory Street in 1936. They built a church on Black Avenue at Douglas Park in 1937. A new church was built at 426 Ash Street in 1938.

Bishop Rawlings simultaneously pastored in Lexington and in Winchester, KY, at 3rd and Walnut Streets. In addition, in 1937, Elder Rawlings continued to run revivals. He was joined by James Briskel Thomas, the 23-year-old son of Minor and Charity Thomas of Stamping Ground, KY. James was Elder Rawlings' boyhood friend. He accompanied Elder Rawlings to a church in Georgetown, KY, and also joined him in the ministry in Lexington. James B. Thomas would become a leader and Bishop in the church.

In August of 1947, at the General Assembly, Bishop Alaska A. Smith stated that Elder Rawlings would be his successor. Bishop Smith was the First Chief Apostle of the House of God. At that same Convocation, he ordained Simon P. Rawlings to the Bishopric. Shortly thereafter, Bishop Smith became ill. As Bishop Larry Sherrill would document in his book on the History of the House of God, Bishop Smith appointed Bishop Rawlings to take over his responsibilities as Senior Bishop. In August of 1950, what had been a local church on Ash Street became the national headquarters of the House of God, The Holy Church of the Living God, The Pillar and Ground of the Truth, House of Prayer for All People. Bishop Rawlings was elected and confirmed the Second Chief Apostle and General Superintendent of the church.

In the late 1950s and early 1960s, Bishop Rawlings had a regular Sunday night radio broadcast. The House of God would become known for having some of Lexington's best singers and musicians. It would also be known for hosting some of the nation’s recording artists. Great soloist and singing groups were a weekly feature of the services and included the Walmack Brothers, Dixie Hummingbirds, Staple Sisters, Sister Pittman, Commissioned, Ricky Dillard and New G, James Moore, Vanessa Bell Armstrong, Dorinda Clark, and Bishop Marvin Winans.

The local church membership grew rapidly under Bishop Rawlings' leadership, as did the national church. By the late 1950s, the small building on Ash Street would no longer comfortably accommodate the weekly attendance, much less the national meetings. On June 17, 1959, the House of God purchased property on the corner of Georgetown Street and Georgetown Place. On August 21, 1960, at 11:45 a.m. delegates to the National Convocation marched from 426 Ash Street to their new headquarters at 548 Georgetown Place. The church continued to grow. The old Julius Mark property at 866 Georgetown Street in Lexington was purchased and a new dual-sanctuary facility was completed. The construction was not completed when Bishop Simon Peter Rawlings passed away on January 1, 1991.

In October 1967, Bishop S.P. Rawlings received his Bachelor of Sacred Theology from Coopers Institute in Jacksonville, FL; and his Doctor of Divinity degree from the Kentucky College of Contemporary Religion, of which he was President. Bishop Simon P. Rawlings also served a term as President of the Lexington Coalition of Black Churches, an organization established to provide economic assistance to the disadvantaged citizens of Lexington. He was posthumously given the distinguished citizens award by Mayor Scotty Baesler in August 1991 and posthumously declared a Kentucky Kernel by Governor Wallace Wilkerson.