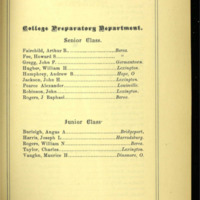 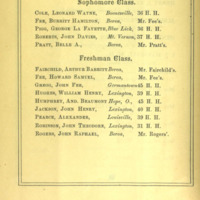 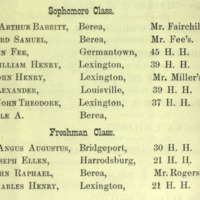 (born: 1844  -  died: January 1905) A. G. Pearce (R) was nominated for the U.S. Congress in 1884. He was living in Greenville, MS, where his nomination came from the 3rd District, referred to as the Shoestring District in the newspapers.

Pearce was a literate and articulate man who was born in Kentucky in 1844. He was educated at Berea College. It is not known when he made his way to Mississippi; his obituary in the Vicksburg newspaper mentioned that Pearce had come to Mississippi after the U.S. Civil War. In the 1880 U.S. Census, Pearce was one of three persons with the last name Pearce and that he had come from Kentucky to live in Greenville. There were also the storekeepers George and his son Jonas Pearce, who were white; A. G. Pearce was enumerated as a mulatto and single.

According to the census record, A. G. Pearce's father was born in Kentucky and his mother in Virginia. It is not known at this time if Pearce and his parents (or parent) had been enslaved in Kentucky. A. G. Pearce was in Greenville in 1874 when his name appeared in a legal advertisement in The Greenville Times: J. B. Bell v. N. T. Nelson et. al. That same year, Pearce was named secretary of the newly formed citizens group of African American men who had come together to put forth civil rights requests concerning African Americans in Greenville. In 1875, Pearce was chosen as a 3rd District delegate to the Washington County Republican Convention. In the 1880 U.S. Census, he was listed as a planter and a school teacher assigned to teach at the Silver Lake neighborhood school in 1876. Prior to that, Pearce had served as a deputy clerk at the Chancery Clerk's Office.

A. G. Pearce was a social, political, and civil rights activist and an outspoken member of the Conference of Colored Citizens. In 1879, he made known his intention to run for Chancery Clerk. News of Pearce's bid for the clerk position was reprinted in newspapers in Vermont, Massachusetts, Virginia, North Carolina, and several other states. In the November election there were six candidates for the Chancery Clerk position; Pearce received the 3rd highest number of votes. In 1880, U.S. President Rutherford B. Hayes (R) sent to the Senate his nomination of A. G. Pearce as postmaster of Greenville. The nomination was one of many that the Senate did not act upon, so the nomination expired. A. G. Pearce would be named the Greenville postmaster the following year.

In 1881, Pearce testified before the U.S. House of Representatives as a witness in the case of John R. Lynch v. James R. Chalmers. In his testimony, Pearce said that he was 37 years old, was the Greenville postmaster, and had been living in Greenville for the past eight years. [This would mean that Pearce came to Mississippi around 1872 or 1873.] He was named the postmaster of Greenville on May 5, 1881.  Pearce resigned as the postmaster on June 8, 1882. Judge Frank Valliant, who had served as mayor of Greenville, was named the new postmaster on February 12, 1883 [source: National Archives, U.S. Record of Appointment of U.S. Postmasters, p.870-871 (Ancestry)].

In 1884, there were newspaper articles that denounced Pearce as a candidate for the U.S. Congress. The articles said that Pearce was unfit for the wealthy and popular Shoestring District. The Democrats had not put forth a candidate but acted promptly in finding one after Pearce's nomination. In the November election, Hon. T. C. Catchings (D) defeated Pearce for Congressman representing the Shoestring District.

A. G. Pearce continued in his role as an activist in Greenville and Washington County. He helped organize the September 1885 Emancipation Day celebration.

Pearce was also a Mason; in 1889, he gave the welcoming address at the annual State Grand Lodge Meeting. In 1890, A. G. Pearce was chairman of the Colored Relief Committee. He presided over The Colored Levee Convention that was attended by "public-spirited men" from Mississippi, Louisiana, and Arkansas. The organization drafted resolutions urging the government to aid in the building of levees. Greenville was flooded in 1890 due to breaks in the levee on the east bank of the Mississippi River. Pearce was also many times the person asked to participate in events such as the 1895 Douglass Club banquet and ball and the 1896 planning of Negro Day during the Vicksburg Exposition Celebration.

In 1899, A. G. Pearce was a member of the Mississippi Republican Party Executive Committee. There was no state convention that year. In 1904, he came out of retirement and again ran unsuccessfully for U.S. Congress as a Republican. The opposing candidate was Congressman B. G. Humphreys (D) of the 3rd District. Pearce said that he was a candidate on the orders of U.S. President Theodore Roosevelt (R), who supposedly was not pleased with the way the campaign was being managed in Mississippi. The Commonwealth newspaper announced Pearce's candidacy and suggested that he should have been lynched for some perceived infraction that had occurred in the last state election.

Among his many other activities, A. G. Pearce was also a newspaperman. He was the editor of the Equinox Publishing Company that published the African American newspaper Pathfinder, a weekly established in 1899 that cost $1.00 per subscription. Pearce was also one of the 30 African American promoters said to be among the wealthiest and most prominent in Mississippi. The 30-man group gathered in April 1899 to raise funds for the building of a cotton factory in Jackson, MS. A couple years later, in 1901, Pearce was one of the concerned African Americans who gathered at New Hope Baptist Church in Greenville to form a three-man committee to draft a petition to the city of Greenville requesting that the city hire an African American policeman; Pearce was a member of that committee.

Alex G. Pearce was last listed in the 1900 U.S. Census; he was single and a boarder at Isaac and Annie Judkins's home on Broadway. In 1905, Pearce died in Greenville and was buried on January 16, 1905; it was said there were 600 people in attendance. The Vicksburg Herald referred to Pearce as "one of the most striking figures of reconstruction times in Mississippi and probably no abler [N]egro has ever lived in Washington County." "With Pearce passes the most noted colored figure of Washington [C]ounty days from 1870-1880."

Alexander G. Pearce was a student at the Berea Normal School and College from 1867-1872. He did not graduate. Pearce was last noted as a sophomore taking Greek and Latin classes. Pearce lived in Howard Hall in 1871. He and two younger students, Emma and Horace Pearce, who are thought to be Alexander's siblings, had the name Edmund Pearce as the person responsible for their education. Their home locations are given as Louisville, Horse Cave, and Caverna, KY. This information comes from the Historical Register Of the Officers and Students of  Berea College, from the Beginning to June 1904. The students' last names are sometimes spelled Pierce. Edmund Pearce may have been a relative of all of the students. Comparing the date that Alexander G. Pearce was last at Berea College and the date that he came to Greenville, MS, it looks as if A. G. Pearce may have left Berea to go to Mississippi. A. G. Pearce kept in touch with Berea College: his residence, activities, occupations, and his death date and location are noted in his school record. Attached to this entry are copies of the pages from the Catalogue of the Officers and Students of Berea College showing Alexander G. Pearce's name: 1869-70, p. 7; 1870-71, p. 6; and 1871-72, p. 6.

EDMUND PEARCE
Edmund Pearce (1813-1880) was a wealthy landowner and slave owner from Jefferson County, KY. In 1850, he owned 12 enslaved people, according to the U.S. Federal Slave Schedule. Edmund Pearce is listed as the father of account holders Horace Pearce (b. 1849) and Edmund B. Pearci (b. 1863), at the Louisville Freedman's Bank. Horace and Edmund B.'s mother's name on the applications is given as Mary Pearce. Source: the U.S., Freedman's Bank Records #5829 and #6645 (Ancestry). Emma Pearce was born in 1856 in Hart County, KY. In the Kentucky Birth Records (Ancestry), only her first name is given, and there is no last name given for her mother, Emma, who is described as a mulatto. Her father or owner is listed as E. Pearce.