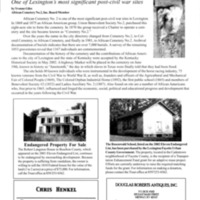 Often mentioned as one of the early schools for African Americans in Lexington was a school taught by a white man from Tennessee around 1830. But an even earlier school was a Sunday school taught in 1798 at the home of Colonel Patterson on High Street [source provided by Yvonne Giles: "A Sunday School," Kentucky Gazette, 10/16/1798, p. 3. col. 2].

Between 1866 and 1870, there were at least four schools supported by the U.S. Bureau of Refugees, Freedmen, and Abandoned Lands [see the NKAA entry Freedmen Schools, Kentucky]. In 1867 two of the schools in Lexington included Howard School on Church St. and Mitchell & Talbott School on Upper Street. In 1867, the Independent African Church School had been opened by Rev. Frederick Braxton; H. C. Marrs left the colored school in Lagrange, KY to teach at Braxton's school in Lexington [source: Ante-bellum free Negroes as race leaders in Virginia and Kentucky during Reconstruction (thesis) by C. B. King, p. 116].

In 1896, there were 16 colored schools in Fayette County [source: Biennial Report of the Superintendent of Public Instruction, 1895-1897, pp. 347-351]. Five of the schools were held for five months, and 11 of the schools were in session for more than five months. One of the schools was a training school for colored teachers. The average total attendance at all of the schools was 1,011 students who were taught by 16 teachers (one teacher at each school). The teachers' average monthly pay was $70 for male teachers and $52 for female teachers. In 1925, the colored high school was located at Dunbar School in Lexington;  W. H. Fouse was the principal [source: Kentucky Public School Directory, 1925-1926, p. 39]. The school was rated an "A" high school.

The Maddoxtown School was a county training school for teachers; L. W. Taylor was the principal [p. 65]. In 1925, four teachers taught at the Maddoxtown training school, which had a four-year high school. The teachers' average salary was $1,088 for a nine month term, the highest average salary of all the teachers at the colored training schools in Kentucky. The supervisor of the industrial teachers in Fayette County in 1925 was Mrs. E. Birdie Taylor [p. 66]. In 1925, there were 13 colored elementary schools in Fayette County  with one high school, all taught by a total of 18 teachers [p. 67]. In Lexington, there were 39 elementary teachers and 15 high school teachers [p. 69].

For more see The Education of the Negro Prior to 1861, by C. G. Woodson; Maydwell's Lexington City Directory 1867; Emerson and Dark's Lexington Directory 1898-9; "Colored school location," Leader, 8/10/1883, p. 1; "Colored county schools," Leader, 9/6/1903, p. 3 and other articles in the Lexington Leader newspaper between 1895-1911; and Educational History of the Negroes of Lexington (thesis), by William Henry Fouse, which includes information on teacher S. Jane Washington. See also Rosenwald Schools in Kentucky 1917-1932,, by A. Turley-Adams, Kentucky Heritage Council and Kentucky African American Heritage Commission; and Ante-bellum free Negroes as race leaders in Virginia and Kentucky during reconstruction (thesis), by C. B. King, pp. 106-107 & 111-114].