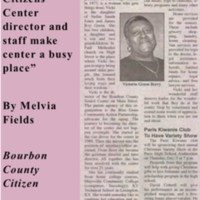 Victoria (Vickie) L. G. Berry, born in Paris, KY, was the first African American director of the Bourbon County Senior Citizen Center.  She was with the Center for almost 25 years when she retired in 2012. She was first a van driver, then advanced to clerk typist, and in 2005 was named director. Vickie was a 1975 graduate of Paris High School. She was the daughter of Nellie Jones and James Roy Green. Her obituary is online at the Lusk-McFarland Funeral Home website. The Bourbon County Senior Citizen Center was located on the corner of Main and Bank Row in Paris, KY. The new facility is located at 11 Legion Road in Paris, KY, and is the Bourbon County Senior Citizens Center (an "s" added to word citizen). The purpose of the center is to provide services to people 60 and over, to help them remain independent as long as possible. Support and funding is provided locally (city and county), state and federal, and through donations and volunteers. While no one can recall the exact date the Center was established, former directors remember it was a nutrition center in the late 1970s and early 1980s, and it eventually became a full service facility with an adult day center. The present director is Laurel Gambill.  Former directors are Victoria Berry, Wendy Bateman, Lou Carter, and the late Carrie Bishop. The Center is part of the Bluegrass Community Action Partnership. For more information contact the Bourbon County Senior Citizens Center.

Care of the Elderly