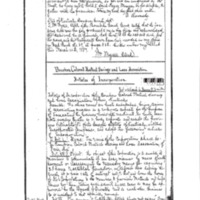 *Attached to this entry is a .pdf copy of the "Bourbon County Mutual Savings and Loan Association. Articles of Incorporation." The copy is provided by Lindrell Blackwell, a community historian from Paris, KY. The original document is available at the Bourbon County Clerk's Office that is located in the Courthouse in Paris, KY. {Deed 69, v.2, pp.389-391}