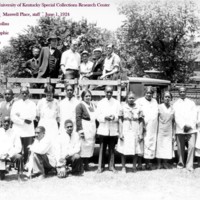 In 1904, much was written about the attempted murder of the Mulligan family at Maxwell Place in Lexington, KY. The University of Kentucky (UK) purchased the property in 1917 for $40,000 [source: History of the President's Residence, Maxwell Place, a UK website]. The attempted murder case in 1904 is still talked about and written about from time to time, but not much of anything has been written about Lewis Mitchell, who was at the center of the case. Mitchell, an African American servant at Maxwell Place, was accused of putting arsenic in the baked salmon on September 24, 1904. As he was about to serve the dish, Lewis Mitchell warned the family not to eat the salmon. The dish was sent to the chemistry department on the UK campus where it was found to contain a large amount of arsenic. Lewis Mitchell was arrested.

During his questioning, Lewis Mitchell revealed that James J. Mulligan (the son), who lived in Chicago but was visiting his home, had agreed to pay Lewis Mitchell $100 to poison the family. Lewis was to get his money after the funerals. Judge James H. Mulligan (the father), the head of the household, was absent from the mid-day meal on September 24. At some point prior to serving the salmon, Lewis Mitchell changed his mind about poisoning the family. After Mitchell's arrest and at James J. Mulligan's (the son) insistence, Chicago detective Luke P. Colleran was summoned to Lexington to help with the investigation. The court exonerated James J. Mulligan (the son) of any wrong doing. There was a hung jury at Lewis Mitchell's trial in June of 1905, and he was acquitted and set free. The story and private lives of the Mulligan family were front page news for months in the Republican newspaper, the Lexington Leader. Prior to the arsenic case the name Lewis Mitchell had rarely been mentioned in the local newspaper except when he was accused of murder back in 1898.

Lewis Mitchell, born in Lexington, was the husband of Alma "Allie" Mitchell; the couple lived at 167 Montmollin Street when the attempted murder took place at Maxwell Place in 1904 [source: p. 455 in Lexington City Directory, 1904-1905]. Lewis' job is listed there as coachman. He and his wife were also listed in a much earlier directory when Lewis worked at the O&CRR [Ohio and Chesapeake Railway] when the couple lived at 42 Prall Street [source: p. 636 in Emerson & Dark's Lexington Directory 1898-9]. Lewis and Alma had married in 1897 [according to the information given in the 1910 Census]. The following year in January, Lewis Mitchell and his brother Henry were accused of murdering John Sanders in front of Bradley's saloon in Pralltown, and a special session of police court was held for their trial [source: "Heldover," Lexington Leader, 1/28/1898, front page]. John Sanders was African American. William S. Bradley was white, and his saloon was located at 33 Prall Street [source: p. 981 in Emerson & Dark's Lexington Directory 1898-9].

The saloon was on the same street as the home of Lewis and Alma Mitchell. Lewis' brother Henry Mitchell was a laborer who lived at home with his parents at 50 Sellers Alley [source: p. 636 in Emerson & Dark's Lexington Directory 1898-9]. Others living in the parents' home were their sister Minnie Mitchell, a cook, and Benjamin Mitchell, a hostler (p. 635). The father, Armstead Mitchell, was a porter at Stoll, Vannatta, & Co.; his wife's name was Lou [Loulia] (p. 635). All of the Mitchells lived near each other; Prall Street and Montmollin Street T into Sellers Alley are in the Pralltown neighborhood located across the street from the University of Kentucky campus. Pralltown is one of the oldest African American "neighborhoods" in Lexington.

It is not known if the Mitchell and Mulligan families knew of each other before 1904. In several articles, Lewis Mitchell is referred to as the "long trusted" servant of the James H. Mulligan family. Perhaps he was a trusted employee. According to  Jamie Millard's account of the story in the Smiley Pete article "(Attempted) Murder Most Foul," Lewis Mitchell was on parole from prison when he was working for the Mulligan family in 1904. Lewis is listed twice in the 1900 U.S. Census: once as a prisoner making brooms at the Kentucky State Penitentiary in Frankfort, where he was serving time for the murder of John Sanders; the second listing has both Lewis and Henry living at home with their parents. Henry worked as a farm hand. At some point between 1900 and 1904, Lewis Mitchell was employed at Maxwell Place.

The question that has not been answered is whether Lewis Mitchell, who had been sentenced to prison for murder in 1898, was paroled in 1900 to work at Maxwell Place due to the influence of Judge Mulligan, and if it was during this period that Lewis Mitchell became a "long trusted" servant of the Mulligan family, which swayed positively on his acquittal in 1905. There is not a record of any reprisals from the Lexington community toward Lewis Mitchell, though African American men were still being lynched in Kentucky in 1905 [see Kentucky Lynchings at genealogytrails.com; and Racial Violence in Kentucky, by G. C. Wright].

After the attempted murder trial, Lewis Mitchell remained in Lexington: both he and his wife are listed in the Lexington City Directory, 1906-1907, p. 385, still living at 167 Montmollin Street in Pralltown. A few years later they were living in Indianapolis, where Lewis was a shovel man on a dredge boat and Alma a washerwoman [source: 1910 U.S. Census]. They would return to Kentucky and by 1930, Alma was a widow living on Prall Street in Lexington; Lewis had died in Lexington  February 26, 1927; he is buried in African Cemetery #2 [source: Kentucky Death Certificate File No. 3251, Registered No. 130].  Alma "Allie" Mitchell died in 1953; she had been born around 1877 [sources: "Woman dies at home," Lexington Leader, 12/17/1953, p. 6; and 1900 U.S. Census]. Lewis' brother Henry G. Mitchell died in Muncie, IN on September 16, 1946. Henry was born around 1876 [sources: Indiana Certificate of Death Local No. 504, Registered No. 26307; and 1900 U.S. Census]. Henry and Lewis Mitchell were the sons of Loulia Boulder Mitchell and Armstead Mitchell.

[Armstead Mitchell, the father of Lewis Mitchell, was born in 1858 during slavery; he died February 21, 1933 [source: Find A Grave] and is buried in African Cemetery #2. Armstead was the son of George and Ellen Mitchell [source: 1870 U.S. Census]. George Mitchell was a farmhand whose  wife worked at home. The couple had eight children. In 1898, the year that Lewis and Henry were standing trial for murder, their father Armstead was working at Stoll, Vannatta, & Co. The company distilled Old Elk Whiskey and was a wholesaler of whiskey, wine, and other spirits [source: p. 769 in Emerson & Dark's Lexington Directory 1898-9]. The company office was located at 43 and 45 W. Main Street in Lexington with James S. Stoll as president.]

[Judge James H. Mulligan (1844-1915), born in Lexington, was an attorney, judge, writer, orator, and a member of the Kentucky House of Representatives (1881-1889) and Senate (1889-1893). In 1894, U.S. President Grover Cleveland appointed James H. Mulligan consul-general to Samoa, a position he held for two years before returning to his home in Lexington. James and his first wife, and after her death the second wife, along with all eight of his children, lived with his parents at Maxwell Place. Judge Mulligan's political career ended at the close of the 1904 attempted murder trial. Read more about James H. Mulligan in The Kentucky Encyclopedia, pp. 660-661.]

[Ellen McCoy Mulligan and Dennis Mulligan (1818-1900) were Judge Mulligan's parents. Dennis Mulligan was an Irish immigrant who came to the United States in 1833. He owned a grocery store and became a Democratic Party leader in Lexington. The Daily Press (1870-1890), an early iteration of the Lexington Leader newspaper, was viewed as the organ of the Mulligan machine. Dennis built Maxwell Place in 1870, the same year that African American men got to vote as a result of the ratification of the 15th Amendment. Read more about the political influence, tactics, and favors of Dennis Mulligan among the Irish and African Americans in Lexington in Bossism and Reform in a Southern City: Lexington, Kentucky, 1880-1940, by James Duane Bolin.]