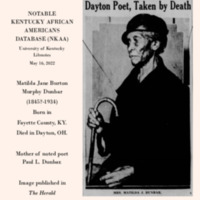 Mother of Paul Laurence Dunbar, she was born Matilda Jane Burton in Fayette County, KY, the daughter of Willis and Eliza Burton. She was not sure of her exact birthdate. Matilda was enslaved by David Glass in Shelby County. She was married to William W. Murphy when she was about 16-years-old. Their son William Travis Murphy was born in 1864 in Shelbyville, KY. Matilda gained her freedom with the ratification of the 13th Amendment. She left Kentucky and a second son, Robert Small Murphy, was born in Dayton, OH in 1866. The family lived at 311 Howard Street.

Matilda Murphy had come to Dayton in the spring of 1866 to live with her mother, Eliza Burton, according to the National Park Service webpage dedicated to Matilda. Matilda's brother, Robert M. Burton had also come to Dayton in 1866 after his military service. Their mother, Eliza Burton, had been in Dayton since at least 1862 when she was listed on p.67 in Williams' Dayton Directory for 1862-63. She was living at 47 Howard Street.

Matilda Murphy is listed as a widow in Williams' Dayton Directory for 1868-69, p.182. She remained in Ohio, and a few years later, she married Army veteran Joshua Dunbar on December 23, 1871, in Montgomery County, OH (Dayton). Their marriage certificate is online at Ancestry.com. Joshua and Matilda were the parents of Paul L. Dunbar (1872-1906) and Elizabeth Florence Dunbar (1874-1876).

Matilda and Joshua Dunbar separated in 1874. Matilda was employed as a laundress during the day and she attended the Ziegler Street school at night. She still lived at 311 Howard Street according to Williams' Dayton City Directory for 1874, p.140. Her mother, Eliza Burton, a widow, lived with Matilda and her family at 311 Howard Street as early as 1873. Eliza Burton is last listed on p.99 of Williams' Dayton City Directory for 1876-7.

In 1887, Matilda's second son, Robert S. Murphy moved to Chicago. He was employed as a waiter. In 1893, Matilda's oldest son William T. Murphy joined his brother in Chicago; he too was employed as a waiter. Matilda's son, Paul married Alice Ruth Moore in 1898, and Matilda lived with the couple in Washington, D. C. The arrangement did not last very long. In the 1900 U.S. Census, Matilda Dunbar was enumerated as living with her son Robert and his family at 59 Dearborn Street in Chicago.

By 1910, according to the U.S. Census, Matilda Dunbar was again living in Dayton, OH; she and her son Paul came back home in 1904 and purchased a home. Paul L. Dunbar died in 1906. Matilda's son William T. Murphy died in Chicago in 1932, according to the Illinois Deaths and Still Births Index (Ancestry). Matilda Jane Burton Murphy Dunbar died in 1934. She outlived all but one of her children. She had kept Paul L. Dunbar's library and home until her death. The home, the Dunbar House, is the first publicly-owned historic site to honor an African American (Dayton, OH). After Matilda Dunbar's death, the home went to her only remaining son, Robert S. Murphy who later sold the home to become a state museum. Robert S. Murphy became a widow when his wife died in 1940.

In 2006, the grave of Matilda's youngest child and only girl, Elizabeth Florence Dunbar (1874-1876), was placed next to her mother's grave in Woodland Cemetery in Dayton Ohio. The child had died at the age of 2 from sickness and malnutrition and had been buried in a potter's field. Shortly after Elizabeth's death, her parents divorced.