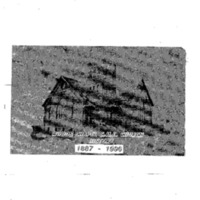 (start date: 1870  -  end date: 2019) The start date for Woods Chapel C.M.E. Church in Millersburg, KY, is 1887, according to the written history that is attached to this entry. Though, there is an earlier history.

The Colored Methodist Episcopal Church (CME) Movement was started in 1870 by Rev. William Henry Miles, a Kentucky native. Rev. Miles had been a member of the Methodist Episcopal Church, South, that was white. The white Methodist Church, including the one in Millersburg, had had African American members who were slaves and those who were free. According to the written history, it was after the U.S. Civil War that the freemen established their own Methodist Church in Millersburg. The name of that church has been lost to time. The structure was said to be a log cabin, and the church was organized by Rev. Horace Woods who was also a Kentucky native. The year that the log cabin church was established is not known.

One of the early changes occurred around 1869. A disagreement of sorts occurred, and Rev. William Henry Miles left the white Methodist Church. Miles had gained a following and held sway over many of the African American churches. He became a member of the African Methodist Episcopal Zion Church (AMEZ). Rev. Miles was a founding member of the AMEZ Kentucky Conference. There was an AMEZ Church in Millersburg, KY.

Not all went as planned for Rev. William Henry Miles in the AMEZ Church and he resigned. He returned to the Methodist Episcopal Church, South, and in 1870 developed the Colored Methodist Episcopal Church (CME) as a denomination separate from the white church. This move split the African American Methodist denominations. The AMEZ Church movement had started in the year 1800 in New York, and it predated the CME Church Movement by 70 years. The AMEZ Church in Millersburg was one of twelve in Kentucky that left to follow Rev. Miles and they became CME churches. The new CME churches were located in Millersburg, Falmouth, Carrollton, Flemingsburg, Owensville, Glasgow, Sharpsburg, Elton, Frankfort, Burkesville, Greenburg, and Center Street Church in Louisville [source: pp.329-330 in One Hundred Years of the African Methodist Episcopal Zion Church, by J. W. Hood].

Within Bourbon County, where Millersburg is located, there had been five Methodist Churches, according to the 1870 U.S. Census: Volume 1. The Statistics of the Population of the United States. Table XVIII. Churches, 1870, (Selected Statistics) in Each State and Territory, by Counties. PP.539-540. It is not noted which church congregations were white and which were African American.

Rev. Horace Woods was living in Millersburg during this time. He is listed in both the 1870 and 1880 U.S. Census. His last name is spelled as "Wood" in the 1870 Census. Rev. Woods was a 37-year-old farmhand and lived with his wife Sarah and an 18-year-old named Ellen. In 1880, Rev. Woods was a carpenter and said to be about 48 years old. He lived with his wife and grandson. There is no mention of him being a minister in either of the census records. But, it is highly likely that his most profitable occupations were the ones listed in the census records.

The first official church document for the Millersburg church is the land deed dated 1887. A white frame building was built on the land at the corner of Fifth and Miller Streets. The church was destroyed by fire in 1910. William McElroy was the pastor. Church services were held at the O.B.F. Lodge Hall until the new church was completed 1913 or 1914. See the attached history for more about the church, pastors, stewards and stewardesses, and trustees.

Church membership books from the early 1900s are within the Nannie Parker Johnson Baker Collection at the University of Kentucky Special Collections Research Center. Mrs. Baker served as the church secretary and a stewardess.

*Data and supplemental materials for this entry were provided by Mrs. Leenora Gray, daughter-in-law to Nannie Parker Johnson Baker.

Read about Millersburg, Kentucky in Wikipedia.