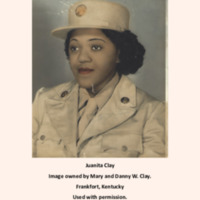 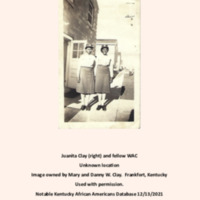 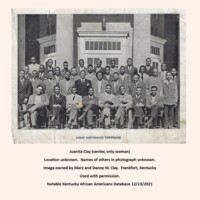 Juanita Clay was living in Louisville, KY, when she enlisted in the Army in Cincinnati, OH, according to the record in Ancestry. *In Louisville, she operated a booth at M. C. Kessick Beauty Shop from 1939-1943. Juanita Clay was a trained beautician and held an operator's license for Kentucky. She had received her training at Madam Walker's Beauty School in Chicago, IL. She attended the school for one year, five days per week. [Source: Juanita Clay's Military Education Record; see Madam C. J. Walker College of Beauty Culture, digital image at Indiana Historical Society.]

Juanita Clay was born in Frankfort, KY, the daughter of James B. and Kate Nelson Clay. The family was enumerated in the 1920, 1930, and the 1940 U.S. Census records. In 1940, Juanita and her sister were said to be employed as maids and their brother was a shoeshine boy in a barbershop.

In 1943, Juanita Clay left her beautician's job and enlisted in the Army, according to her record in National Archives, Access to Archival Databases. *She was a truck driver light 345. She drove jeeps, staff cars, 1/2 ton trucks, and hauled supplies, equipment, and personnel. "Also made minor repairs when necessary." [Source: Juanita Clay's Separation Qualification Record.]

After her military service, on July 28, 1951, Juanita Clay married Charles Payne and they had a son, Jonathan Payne. She later married Harry W. Taylor. Juanita Clay Payne Taylor was a federal employee. She lived in North Highlands, CA. She died in Sacramento, CA, in 2011, and is buried in Green Hill Cemetery in Frankfort, KY.